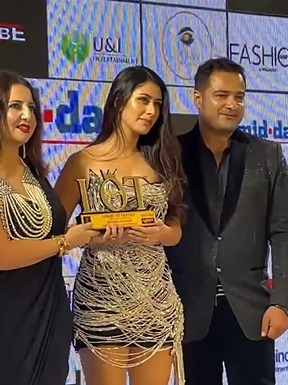 Recently, the entire tinsel town gathered under a roof to celebrate and appreciate the talents at the Lords of Trendz Awards. Actress Warina Hussain, who has always been known for her alluring personality, enjoys the massive fan following all over. The actress has finally hailed the actress for what she deserves the most. The actress takes home the International Icon of the Year award. The actress grabbed the entire limelight for her scintillating looks and personality.

Whoohoo! The actress bagged the most deserved title that she owns at the International Icon of the Year. We can definitely say that winning this isn’t a tiny thing as it takes a lot of hard work to prove to all your admirers, and undoubtedly, Warina proves it by being the actress who is truly an international icon.

With her tireless efforts and commitment, Warina, a true global icon, is making each of her followers proud by spreading her enchantment over the globe. She thanked all her fans and well-wishers and told them, “Who would have imagined?” Astonished and thankful! I owe it to each one of my fans, not just those in India but all over. Thank you for barely capturing how I feel at this moment. This honor has left me incredibly humbled. I would want to express my gratitude to my admirers for bestowing upon me the status of an international icon. This accolade of being a global icon is given in honor of all my admirers who have shown me solidarity across the globe. Warina is really fortunate to have such wonderful supporters who offer her love from all over the world. “

On the work front, Warina just wrapped up the shoot of her upcoming comedy film Dil Bill. Apart from that, she is also shooting for one of her upcoming films, about which the official announcement will be done soon.