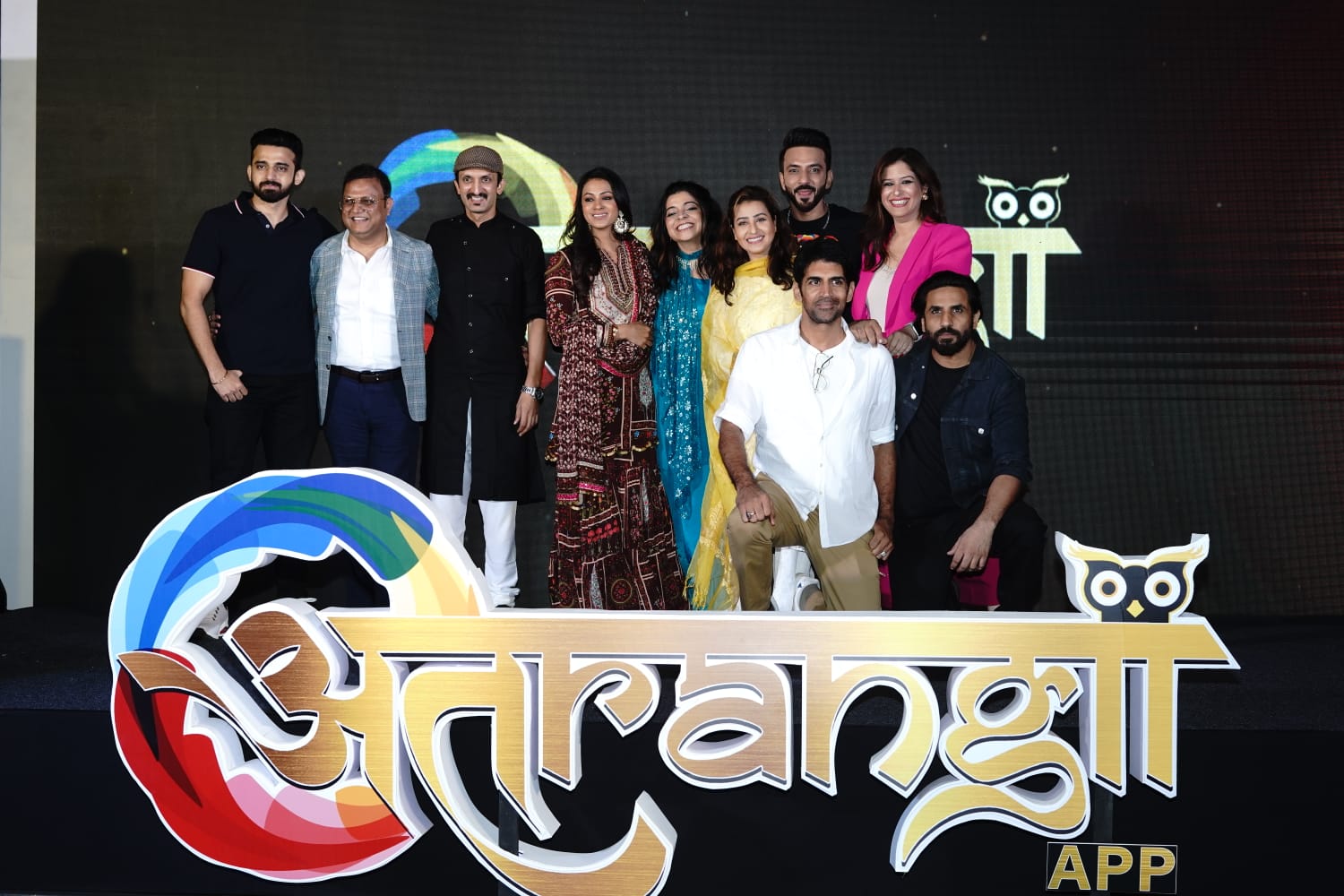 Atrangii App, a freemium OTT platfrom helmed by Vibhu Agarwal has been launched today amidst much fanfare. The app which was rolled out earlier in the month of July and has a catalogue of original content and catch-up viewing of its GEC channel Atrangii TV. Within a short span of time the OTT app has got audiences hooked and boasts of 70 percent monthly active users (MAU). To further ramp up its content offering, the platform has announced five new shows namely – Libaas, Surangaa, Kadiyaa, Womeniya and Naam Gum Jayega. Comprising a stellar star cast, distinctive concepts spanning genres and slick production value, each series will be launched as binge-watch on the platform. The grand launch took place in Mumbai and was attended by the leading cast of the series and renowned names from the entertainment industry namely Isha Koppikar, Freddy Daruwala, Shilpa Shinde, Barkha Bisht, Romit Raj Parsher, Krip Suri, Ali Merchant, Sara Khan, Gaurav Chopra and Amar Upadhayay.

Kadiyaan a slow-burning police drama to unravel the murder of a high-profile socialite, Namrata Khanna. The police has to race against time to solve the mystery before the body is cremated. In the ring of suspicion are a list of people who benefit from the socialite’s death. Kadiyaan is a story that will excavate the past demons of the deceased while grappling with the female inspector’s dysfunctional connection with her mother and her struggles in a male dominated world. Actors Shilpa Shinde, Rahul Roy, Dolly Chawla and Navina Bole will be starring in the series. Libaas is a thrilling murder mystery, starring Ali Merchant, Prajakta Dusana, Nyra Banerjee and Krrip Suri in lead roles. It is a story of a married woman Maya who is being treated for nymphomania. Along the way a young police officer Kabir pretends to fall in love with her, only to get involved with her intimately. Things take a dramatic turn when Maya is found murdered under mysterious circumstances leaving all the men she was involved with under suspicion. On the other hand, Suranga is about a bank heist in Rohtak which is planned by one of the bank employees himself. Suranga will be headlined by actor Isha Koppikar, Freddy Daruwala and Rakesh Bedi in pivotal roles.

The fourth in the list is a gripping drama titled Naam Gum Jaayega, a fight for justice and identity by a woman for her husband who is accused of being a terrorist. The series filled with unexpected twists and turns is the conflict between the wife’s innocent faith and the investigating inspector’s obsessive conviction. Who will emerge victorious is what the series will unfold. Starring Barkha Bisht, Romit Raaj Prasher and Rahul Singh , Naam Gum Jayega is a story never told before. Womeniya is a collection of six stories of how a womans’s sexuality is used and misused. Starring Rashami Desai, Shweta Tiwari, Ashmit Patel, Hrishta Bhatt, Abhinav Kohli, Rituperna Sengupta, Asif Sheikh and Sofia Hayat each story will explore how the society has different standards for men and women especially about their sexuality.

Speaking on the launch, Vibhu Agarwal, Founder & CEO Atrangii shared, ‘
Atrangii App is a freemium platform where 75 percent of the content is behind unpaid wall (AVOD) and the remaining is behind the paid wall (SVOD). In the past few months, we have chosen compelling content for the platform and we are pleased to add a line-up of multi-genre and multi starrer shows to further bolster our content offering. The aim has always been to provide quality entertainment to all hindi understanding and speaking audiences across the length and breadth of the country.”

In Libaas, a Nymphomaniac named Maya is receiving treatment for her mental disorder, but things get challenging for her. Because she and her husband do not get along, Maya falls in love with Inspector Kabir, a younger man who is with her only for the sake of physical intimacy. The moment Maya is murdered under unexplained circumstances, everything changes dramatically. The witness to the murder is a prostitute named Zoya. DCP Rajat Bedi is tasked with solving the mystery surrounding Maya’s death, but his biggest challenge is finding all of the men she was associated with and who is an important murder suspect. Kabir has another challenge of protecting Zoya who is the only witness and would surely be the next target.

The focus of the narrative is the Rohtak-based Dhansukh Bank. Where the bank manager (Basvaraj) hatches a scheme to rob the same bank by masquerading as an assistant manager (Dakshyani), who in turn assembles a team of five individuals and hatches the heist plan. The idea is to construct an underground tunnel and rob the bank safe. The city’s chief inspector, Bajrang Hooda, learns about the theft, but he has no idea that the assistant manager of the bank, with whom he has sort of fallen in love, is the mastermind behind the whole scheme.

It is the story of a young woman, Ayesha and her fight for the identity of her husband Zafar,

which to her shock has been taken for questioning by the police, headed by Inspector Amol Mohite, accusing Zafar to be a terrorist on the run from the 1993 bomb blasts in Mumbai. As we continue on this journey filled with unanticipated detours, the question eventually arises: Does Zafar continue to be the victim of everything or does he somehow end up being the cause of things that happen around? This conflict arises between his wife’s innocent faith and Inspector Amol Mohite’s almost obsessive conviction.

The main focus of the slow-burning police drama Kadiyaan is the well-known murder of Namrata Khanna. Namrata is a successful movie producer and socialite. When Raksha is given the case, she is intrigued by the vast majority of individuals who benefit from Namrata’s passing and she begins to excavate past demons. Each episode speculates on the plausibility of a suspected killer from Raksha’s list of suspects since she has a ticking time bomb because she needs to solve this case before Namrata’s cremation. Raksha’s own dysfunctional connection with her mother and her problems in a world dominated by men are also examined as the thematic thread develops.

Women are supposed to be equal to men yet their sexuality is often ignored in Indian society. Womaniya is based on six stories which are written by Sanjana Singh on real accounts of how sexuality is used and
misused.

Related Topics:Vibhu Agarwal
Up Next