Urvashi Rautela looks stunning in this purple ensembles worth Rs. 10 Lakhs along with Cricketer Irfan Pathan for a launch event, as she captions it by saying,I saved your reputation by not telling my side of the story
Advertisement 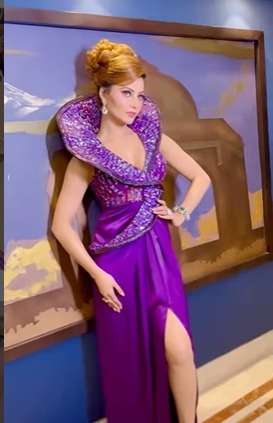 Urvashi Rautela, who is one of Bollywood’s youngest superstars, is the most followed Asian actress on social media, and she consistently strives to uphold India’s honor at all levels. This time, she has made us all proud on a global scale as billionaire Elon Musk invited her to the #AmFarGala. The actress, who consistently owns the red carpet with her hot, sparkling appearances, makes sure to capture everyone’s attention wherever she is present. The actress has dazzled the audience with her beauty, acting prowess, exquisite wardrobe choices, and captivating personality.

Urvashi Rautela took to her social media and shared a video of herself where she looks unbelievably beautiful and is winning our hearts with her charm. Urvashi is seen donning a designer outfit worth Rs. 10 lakhs, which was a purple, highly embellished gown with a high thigh slit cut, a long silhouette, and a shell-shaped structure. She paired her outfit with diamond earrings. Urvashi opted for a bold makeup look with a pink lip tint along with lip gloss. She tied her tresses up in a very stylish bun. Urvashi complemented her outfit with a diamond bracelet and diamond rings.

Urvashi was seen posing effortlessly for the camera, while flaunting her curvaceous body. One more thing that captured the audience’s attention was the caption. She captioned it saying, “I saved your reputation by not telling my side of the story 🔮.”

On the work front, Urvashi has been appointed officially to Judge Miss Universe Bahrain 2022, Along with that, she is a Smile Train Global brand ambassador. Apart from that, the actress received acclamation for her performance in her pan-Indian film, The Legend, and she will also be seen now in Inspector Avinash opposite Randeep Hooda, for Jio Studios and Netflix

Stebin Ben’s ‘Jaana’ is all love, soul, and passion