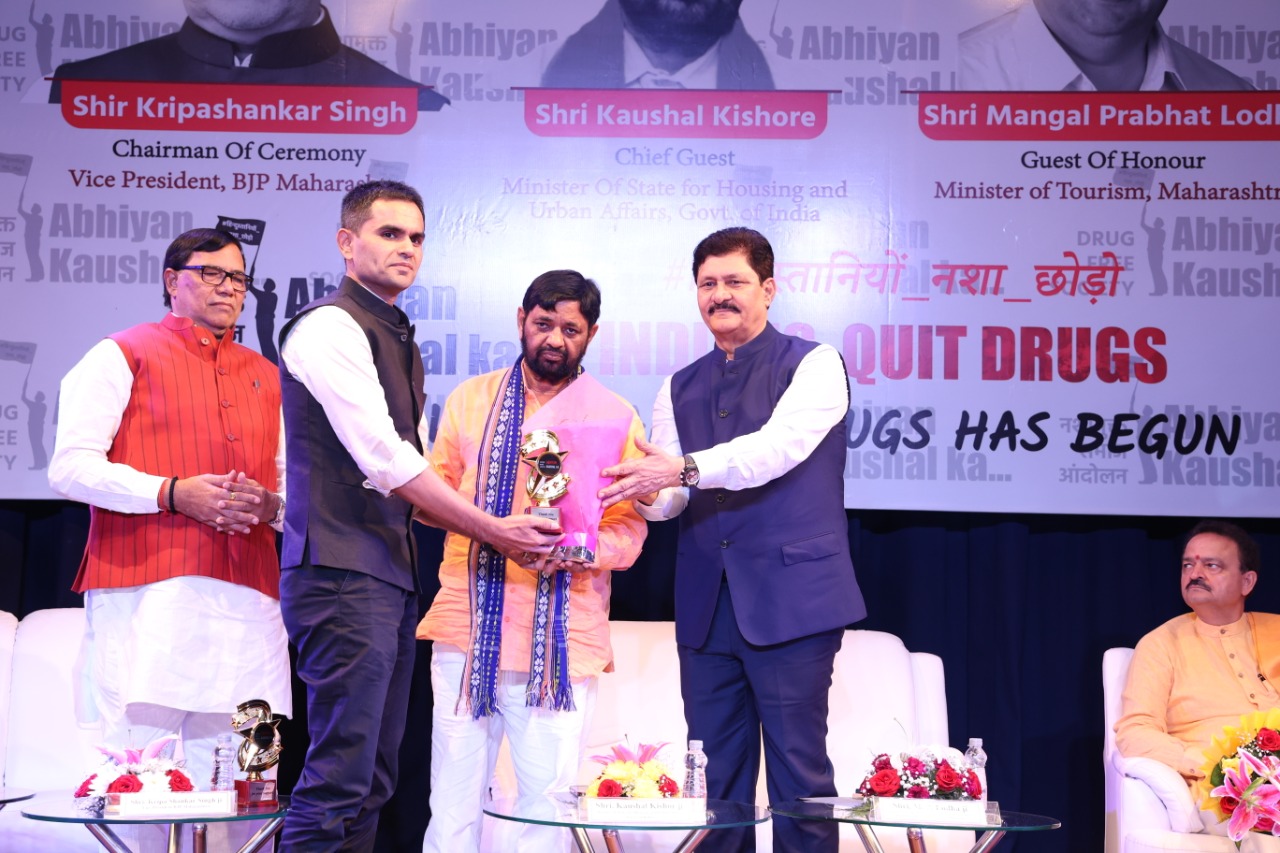 Mumbai : It’s a known fact that since many decades drug mafias are fearlessly operating in various parts of the country. On the expense of the youth of the country, these drug mafias were operating and were earning thousands of crores of rupees every year without fearing the legal or judicial system of our country. But to an extent NCB officer Sameer Wankhede changed the scenario with his crackdown on the illegal drug trade. He left no stone unturned to break the backbone of the drug cartel.

It is needlees to say tht the drug mafia is still fears Sameer Wankhede. So much so that some of them have altogether left this illegal business and some of them have changed their modus operandi. By recognising his contribution and commitment towards making a drug-free society, the current IRS (additional Commissioner) officer Sameer Wankhede was felicitated in a function which was recently held in Mumbai.

During the launch of ‘Abhiyaan Kaushal Ka- Nashamukht Samaaj Andolan’, a unique initiative to crush the increasing menance of drug abuse, Honourable Union Minister Of State Kushal Kumar felicitated upright and honest officer Sameer Wankhede. During the launch and felicitation function, many other BJP supporters and functionaries were also present.

Graciously accepting the award Sameer Wankhede said, “I would like to congratulate Honourable Minister of this unique initiative and also would like to thank him for felicitating and recogniing my contribution toward our society.”

Sameer Wankhede continued and said, “Since many years I have been working in a field where I have got the opportunity to break the backbone of the notorious drug cartel and work towards a society which can become drug-society and thus millions of people can be saved from the aftermath of drug abuse. Not only me but the honourable Prime Minister of India and Honourable Home Minister Amit Shah also has a common dream of making our society drug free. I am committed to fulfill their dreams and will continue to do so until my last breath.

Glad to be felicitated by the honourable Minister of State Kaushal Kumar, he further said, “Not only the youth of the country but I appeal everyone to not consider those people as their role models who themselves into drugs. Instead they should follow people who tirelessly work to bring positive changes in our society.”

Sameer Wankhede said, “For the longest time I have been working towards the goal of making our country a drug-free society. It’s just not my dream but honourable Prime Minister Narendra Modi and Honourable Home Minister Amit Shah are also tirelessly working towards the common goal. I will make sure that their collective dream come true at the earliest and for that I will try my level best. I promise that I will be part of this noble initiative will until we together achieve our goal.”

Sameer Wankhede further said that he will go to any extent to fullfill the dream of Prime Minister and Home Minister Amit Shah and he will not stop until he succeeds in bringing positive changes in our society.

Directly addressing youngsters of our country Sameer Wankhede further said, “I would like to appeal to all the youth of the country and tell them that they should join the Army for at least 2-3 years and serve the country making themselves and India proud.”

It is needless to say that Sameer Wankhede’s commitment towards making the country drug-free and his style of encouraging the youth of the country is praiseworthy enough to get him the biggest awards of the country!

Related Topics:Sameer Wankhede
Up Next