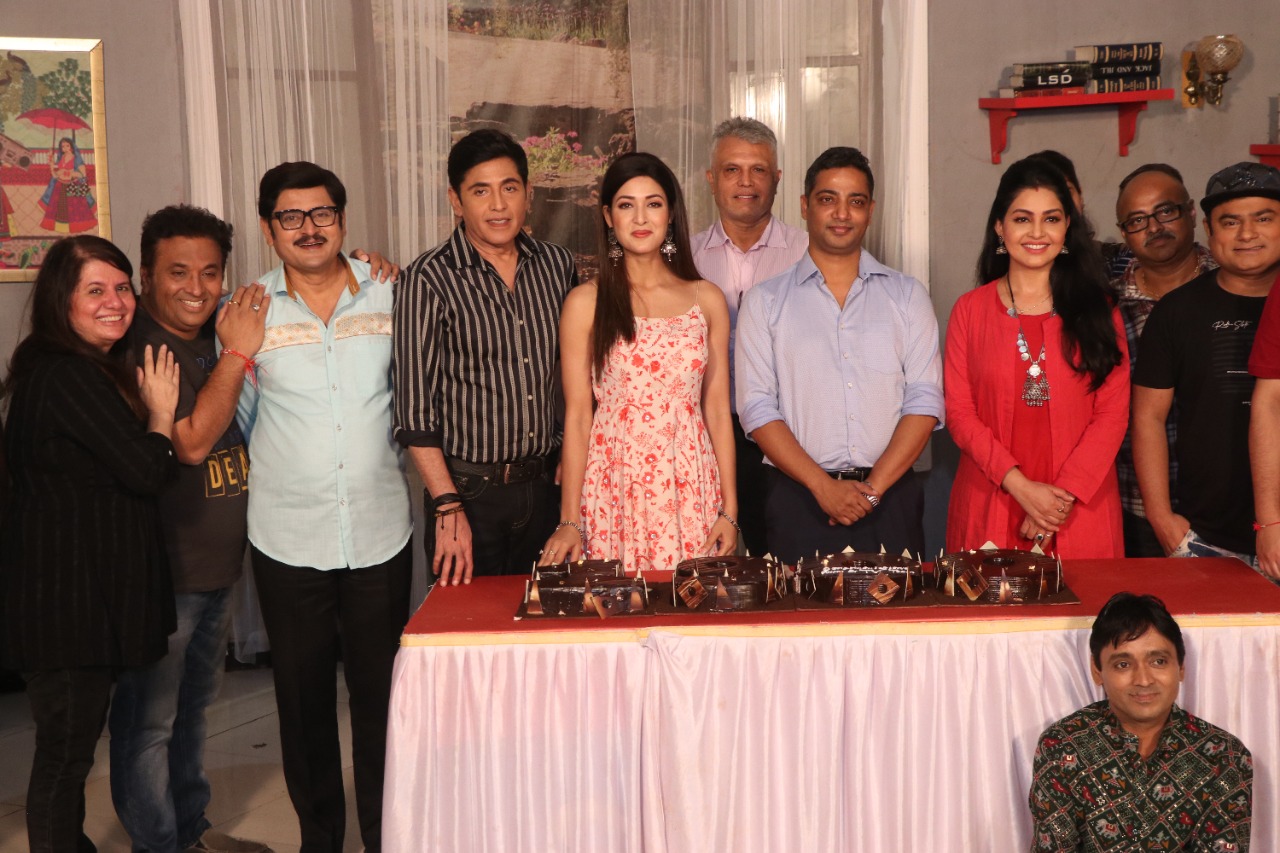 &TV’s cult comedy show Bhabiji Ghar Par Hai has been and continues to be the audience’s favourite comedy show on Indian television for its quirky characters, fun catchphrases, and the constant nok-jhok between the Mishras and the Tiwari in trying to impress the other’s wives. The show recently completed a new milestone of 1900 episodes, adding another feather to its long list of achievements. Aasif Sheikh (Vibhuti Narayan Mishra), Shubhangi Atre (Angoori Bhabhi), Rohitashv Gour (Manmohan Tiwari), Vidisha Srivastava (Anita Bhabhi), Saanand Verma (Saxena), Vaibhav Mathur (Teeka), Syed Salim Zaidi (Tillu), and Soma Rathod (Ammaji) celebrated this moment by cutting a cake on the sets along with Business Head, &TV, Vishnu Shankar the producers Sanjay Kohli, Binaiffer Kohli and the entire crew. Speaking about the show’s success, the show’s producer, Sanjay Kohli from Edit II Productions, shared, “Our show Bhabijii Ghar Par Hai has always strived to bring smiles and spread happiness. The show has been the audience’s favourite, and the 1900 episodes milestone is a testimony to the long-standing love and admiration for the show and its characters. I am grateful to the channel and my entire cast and crew for their enormous contributions to the success of this show. However, without the audience’s help, this journey would have been incomplete. I am eternally grateful for their unconditional love and promise to continue entertaining our audience with more fun tracks”.

Aasif Sheikh (Vibhuti Narayan Mishra) shared, “The 1900-episode completion is a huge milestone for us. We are extremely proud and happy to see how this show has captured the audience’s heart and continues to be one of their favourite comedy shows. It won’t be easy to describe my gratitude for everything this show has given me. I never imagined I would have the opportunity to play 350+ different characters in a single show and be recognized worldwide. Modern Colony has become my second home, and every member here has become a member of my family. The true celebration for me is seeing the audience giving us the same love and appreciation they did when the show started. All I have to say to them is “Thank you.” Shubhangi Atre (Angoori Bhabi) added, “I consider myself blessed to be a part of such an incredible show and to play the iconic character of Angoori Bhabi. The 1900 episode completion is not only a big moment for all of us but also shows the enduring affection and admiration it enjoys amongst the audience. It is the team’s sheer hard work that has reaped results. Kudos to our Producers, the entire cast and crew and our loyal fans and audience. I am grateful to the channel and our producers, Sanjay Kohi and Binaiffer Kohli, for believing in me and giving me this opportunity”.

Rohitashv Gour (Manmohan Tiwari) shared, “Bhabiji Ghar Par Hai has played a crucial role in making each of us a household name. Our hard work and efforts have truly paid off. Our audience’s love keeps us motivated and doing our best. I love playing Manmohan Tiwari so much that I sometimes get confused when people call me by my name, Rohitashv. Sunne ki aadat jo padh gayi hai, Tiwari Ji (laughs). People call me Tiwari Ji whenever I step out, and I love it. Congratulations to our Producers, Channel, and the entire cast and crew!”. Vidisha Srivastava (Anita Bhabi) shared, “Although I am a new addition to this wonderful team as I joined Bhabiji Ghar Par Hai in March this year. But my fans’ and audience’s love and response have been incredible. The team is so lovely and welcoming that it feels like I have been part of this wonderful team forever. Congratulations to the entire team for achieving the milestone of 1900 episodes”.

Watch Bhabiji Ghar Par Hai at 10:30 PM, airing every Monday to Friday only on &TV!

Ouch! Warina Hussain Amps Up Her Fashion Game In This Navratri Look