Peaceful protest against the current management of Osho Ashram’s sale proposition for about 9800 sq. m (little over 2 acres ) situated inside the premises of OSHO International, Koregaon Park, Pune
Advertisement 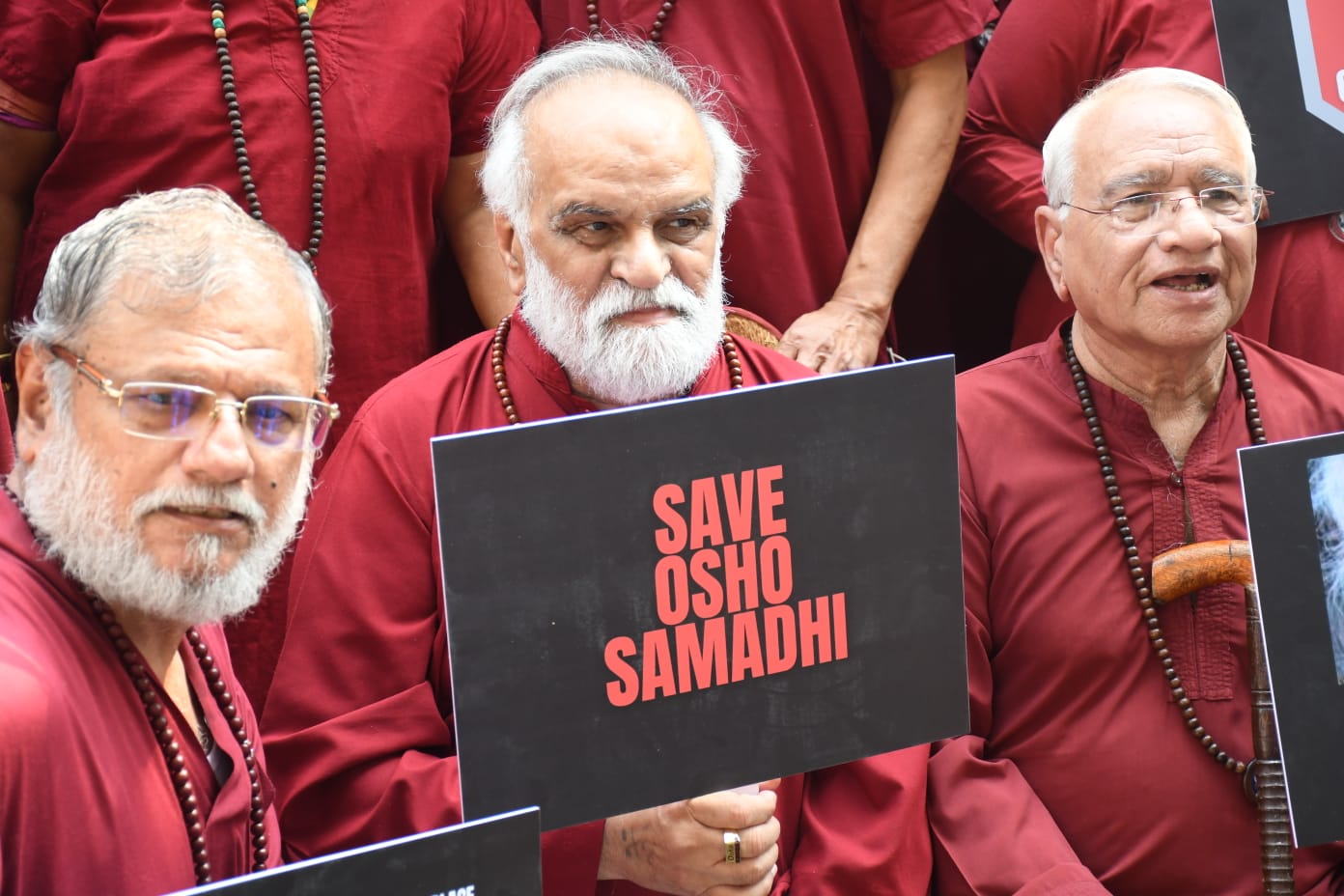 Spearheaded by Disciples and Lovers of Osho from around India, along with Ex-Trustee and Editor of Osho World, Swami Chaitanya Keerti and other prominent Osho disciples, Head of various Osho Centres like Osho Blessings Meditation Commune, Nanded, Osho Meditation facilitators, intervenors in the ongoing litigation and more

The current management’s sale proposition for about 9800 sq. m (little over 2 acres ) of Osho Ashram’s Basho Area mentioned as Survey 15,16 situated inside the premises of OSHO International, Koregaon Park, Pune; for Rs. 107 Cr. The reason for the sale officially being the losses incurred during COVID-19 lockdown, which is approximately Rs. 3 Cr and paid out of the available fixed deposit. Several Osho disciples intervened at the Court of Charity Commissioner Mumbai (Application no. 2/2020) to prevent this sale as the pretext of financial loss is false, there are allegations of financial mismanagement and siphoning off Trust money into private accounts and shell companies in India and abroad by the Trustees of OSHO International Foundation (OIF), for which we have evidence.

Currently, in the ongoing case, the Charity Commissioner had ordered for a re-bidding for the sale of the same plot as the previous bid done by OIF was rendered improper on various grounds. This 15th of November, the re-bid is to be opened at the CC Office, Worli, Mumbai. Herein, the re-bidding is a cover up of the previous MOU to regularise it. Meanwhile there are writ petitions pending at the Honourable High Court of Mumbai against various misdeeds of OIF, Pune. The hearing of the appeal for a Stay on the sale of Basho area is due this 15th of November. It is a crucial moment in this case.

Only recently, the High Court of Mumbai declared Osho’s Samadhi to be open for all devotees and visitors, inside the OSHO International Pune’s premises. The presence of Osho’s Samadhi was vehemently denied by the Trustees of OIF previously in an affidavit, despite clear evidence for its existence. And Basho area is a part of the Samadhi.
For background reference:

Since the year 2000, there have been many accusations against OIF Trust’s malicious intentions, there are court cases pending for the same as well, some of the allegations are listed below:
a. Forgery of Osho’s Will indicative of criminal intent as CFSL report confirms forgery.
b. Formation of OIF, Zurich and transfer of Royalty money to its newly formed Zurich Headquarters. Was there any permission taken from the GOI and RBI?
c. Claim of OSHO as not a person but a trademark entirely, incessant attempt to reduce Osho, a person to merely OSHO, a brand and an author.
d. Foreigner inflow was highest in Maharashtra, majorly comprising of Osho Commune visitors, which was forcibly reduced, which is a loss to the State Government as well.
e. Hiked entrance cost abruptly since the year 2000 to discourage the sannyasins from visiting the ashram frequently, removed the Sannyasin volunteers from working at the ashram, instead hired ‘Sodexo’ a hospitality company at a hefty cost for maintenance of Ashram, and all income pocketed by Trustees directly.
f. Removed Osho’s pictures from all over the Ashram including the Samadhi area and replaced it with a single statue in the entire Ashram in order to prove The Ashram as only a Resort and not a place of worship or sanctity to slowly wind off the entire ‘Osho Movement’ and Osho’s Neo Sannyas Movement.
g. Stopped celebrating Festivals like Guru Purnima, Osho’s day of leaving the body19th January, Osho’s Birthday 11th December, 8th September as MahaParinirvana Diwas and 21st March as Osho’s Enlightenment Day. These celebrations have been customary for several years, under Osho’s guidance. Several video footage is available.
h. The management has tampered with the Samadhi and played mischief upon all Sannyasins / Disciples.

Related Topics:Koregaon Park
Up Next

Will the next IPL be in Thane? Eknath Shinde, Hon CM MH feels so as he inaugurates Sachiin Joshi’s first 5 Star Hotel “Planet Hollywood” in Thane. Relished Chicken Malai tikka and Kababs