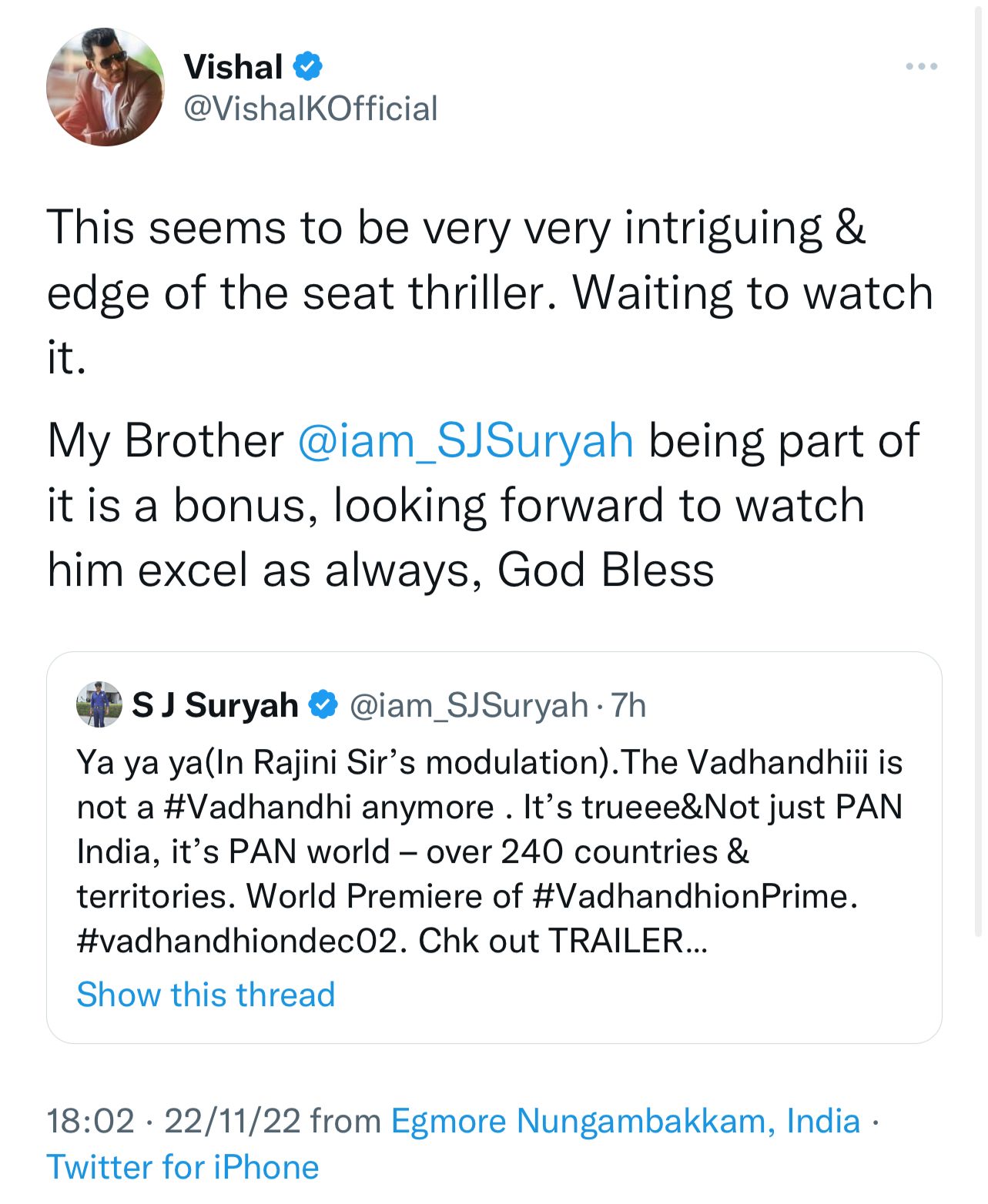 The trailer of Prime Video’s much-anticipated Tamil crime thriller, Vadhandhi – The Fable of Velonie has been making waves every since it launched yesterday- not only with fans, but also within the film fraternity. All eyes are on this crime thriller which launches on the streaming service on 2nd December.
Link: https://www.youtube.com/watch?v=6tOpaiT3eZA

Noted celebrities from, Dhanush, Vijay Sethupathi, Venkat Prabhu, Atlee, Sriya Reddy, Aishwarya Rajesh, and many more have been sharing love on their social handles congratulating the cast and creators for the upcoming series.

While wishing S.J. Suryah for his streaming debut, Dhanush Rajasaid –

“All the best sir”

Impressed by the intriguing trailer, Vishal expressed his excitement to watch this edge-of-the-seat thriller and wrote –

“This seems to be very very intriguing & edge of the seat thriller. Waiting to watch it. My Brother @iam_SJSuryah being part of it is a bonus, looking forward to watch him excel as always, God Bless”

Filmmaker Charukesh Sekar is really excited to watch this thriller story coming from the house of Pushkar and Gayatri. He said-

“Looking fabulous as always Sir. The trailer is really intriguing!
@andrewxvasanth is ready to thrill us with #Vadhandhi.
@PushkarGayatri back with another winner!”

“The 2nd huge webseries from the production house of
@PushkarGayatri, @wallwatcherfilm, #vadhandhi on @PrimeVideoIN. Starring @iam_SJSuryah, created by @andrewxvasanth.Trailer Out”

Produced by Pushkar and Gayatri under the banner of Wallwatcher Films, and created by Andrew Louis, Prime Video’s Vadhandhi – The Fable of Velonie stars the multifaceted film artiste, S.J. Suryah in his streaming debut. The series also marks the acting debut of Sanjana, who plays the titular role of Velonie, and features a stellar ensemble cast including Laila, M. Nasser, Vivek Prasanna, Kumaran, and Smruthi Venkat in pivotal roles. The series is all set to release on 2 December 2022 worldwide on Prime Video in multiple languages.

“For me success and failure has never been my point of focus.” says Sohum Shah as he talks about wanting to play more edgy characters

“Shooting with Romaana was a breeze because he is not only hardworking, he is really kind as well”, says actress Anjali Arora on working with Romaana on Desi Melodies new track Kya Hota