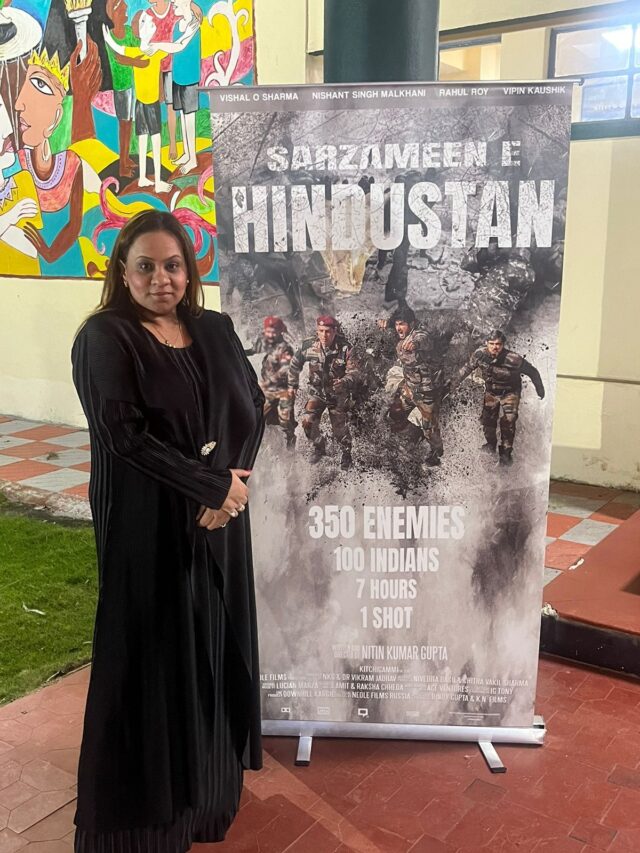 Film Sarzameen E Hindustan based on the Indian Armed Forces battles on the North borders of India, recently had its premiere at Rashtriya Military School Bangalore in front of 400 cadets of the school, Principal Lt Colonel Dipankar Choudhary, and Administrative Officer Major Vikas Saroha.

Amidst cheers and applause during the action scenes, and a 5 minute long standing ovation at the end of the film, the team were felicitated by Awards for Excellence in Portrayal of Martyrs and Raising National Spirit for the writer director Nitin Kumar Gupta and producers Chitra Vakil Sharma and Rohini Vakil.

Writer Director Nitin Kumar Gupta on stage said that he felt honored to premiere the film on this stage as it had been his childhood dream to become a soldier. He said that shooting this film had been an extremely tough endeavor for the entire cast and crew and made them realize what our soldiers went through everyday protecting the borders of the country.

Principal Lt Colonel Dipankar Choudhary on stage said that the film made him recall his days when he had served in high altitude regions and had faced extremely hostile conditions on the borders of the country. He said that he understood how difficult it must have been to shoot the film, especially as it was a single shot film shot on location in Kargil.

Producer Chitra Vakil Sharma called four girls on stage, who are the first ever female students of the military school. The girls received a huge round of applause from everyone present.

All in all it was a proud and heart touching event as the students cheered for the film and the team, and promised to serve the nation as part of the Indian Armed Forces.

Adaa Khan on being part of Naagin: I am always happy when they call me for any season!