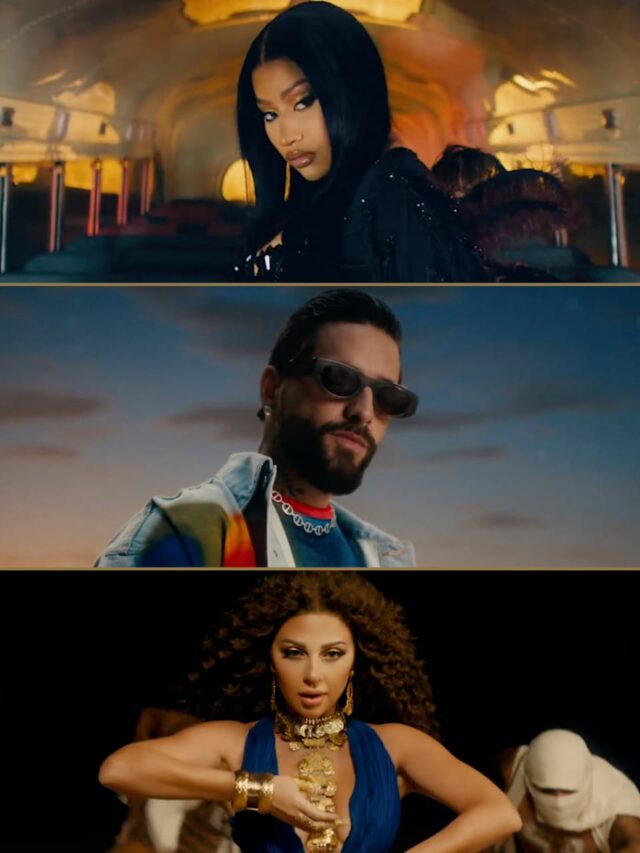 Of the collaboration, Maluma says, “I am so happy to be part of this FIFA World Cup™ anthem! I always dreamt of an opportunity like this. Representing Latin music on this global track alongside amazing artists that sing in English and Arabic, takes our culture to another level.”

Myriam Fares chimes in, saying, “I’m so happy to be chosen by FIFA and Universal Arabic Music, represented by Wassim ‘SAL’ Slaiby and Republic Records, to perform the song ‘Tukoh Taka’. ‘Tukoh Taka’, the song that I was honored to participate in its composition, arrangement, and choreography, made me more passionate about it, in addition to working alongside two of my favorite international artists, Nicki Minaj and Maluma. I truly wish that ‘Tukoh Taka’ will be transmitting the Eastern culture and Arabian music to the whole world.”

“Tukoh Taka” brings together three world renowned superstars and makes history as “the first FIFA World Cup™ song featuring English, Spanish, and Arabic.” This cross-continental banger features a high-energy collaboration between Nicki Minaj, Maluma, and Myriam Fares, as they rap and sing about uniting fans all over the world and celebrating together. The song was produced by Gordo, Play-N-Skillz, and Massari. On November 19th, Maluma and Myriam Fares will perform the song together live for the first time at the opening of Doha’s FIFA Fan Festival™.

ABOUT MALUMA:
Maluma is one of the leading voices in Latin music and a bona fide global youth idol. Born Juan Luis Londoño in Medellin, Colombia, he formulated his artistic moniker Maluma from the first two letters of the names of his mother, father, and sister. The 2018 Latin GRAMMY award winner for Best Contemporary Pop Vocal Album (for F.A.M.E.) is one of social media’s most popular artists with over 25 million Facebook fans, 8 million Twitter followers, and a whopping 63 million Instagram followers, making him the leading Latin male artist on Instagram and the first and only one to surpass 50 million followers. His official YouTube/VEVO channel has more than 28.1 million subscribers, having earned him a YouTube Diamond Play Button Award. With his Maluma World Tour, he has achieved unparalleled success, having sold over one million tickets in 105 worldwide concerts in 2017 alone and becoming the top concert-selling Latin artist in the world. In 2018 and 2019, he broke records achieving full houses in all of his shows throughout the United States and Europe selling out Madison Square Garden (New York), the American Airlines Arena (Miami), and two The Forums (Los Angeles), among others. With his 11:11 World Tour, he also sold out Israel’s largest venue, Yarkon Park in Tel Aviv (60,000+ audience); made history at the 18th annual Mawazine Festival in Rabat, Morocco, setting an all-time attendance record with his headlining concert in front of 200,000 people; and performed for the first time ever in Riyadh, Saudi Arabia in front of 25,000. He continued to take over throughout 2021 and 2022 with sold-outs in the United States, Europe, Latin America, and the Middle East. Since joining Sony Music Latin in 2015, Maluma has released seven albums Pretty Boy Dirty Boy (2015), F.A.M.E. (2018), 11:11 (2019), Papi Juancho (2020), 7DJ (2021), The Love & Sex Tape and The Love & Sex Tape Deluxe (2022). Maluma is the youngest artist to simultaneously hold both the #1 and #2 spots on Billboard’s Latin Airplay chart and only the sixth act to ever achieve the feat he has now repeated three times. To date, Maluma has had twenty-two #1 singles on Billboard’s Latin Airplay chart.

ABOUT MYRIAM FARES:
Myriam Fares is a Lebanese singer, producer, entertainer, and actress. She first appeared on the Arabic music scene with her debut album Myriam in 2003, and she has since become one of the icons of the Arabic world, with her concerts becoming celebrations and her title of “Queen of Stage.” Myriam Fares is renowned for her unique art, which has combined all Arabic cultures and dialects with a modern and unique style. Google appointed Myriam Fares as their only ambassador in the Middle East and North Africa area due to her popularity and her ranking as the most searched celebrity per Google’s search engine. She has appeared in several movies and TV shows, and in 2021, Netflix published a documentary about her life. In May 2022, Myriam’s dance challenge on her famous song “Goumi” surpassed 10 billion views on TikTok alone, making it the most viewed dance challenge globally.

Advertisement
Related Topics:MYRIAM FARES
Up Next

KIM PETRAS RELEASES NEW SINGLE “IF JESUS WAS A ROCKSTAR”

Priya Paramita Paul on International Men’s Day: I really appreciate men taking stand when required and making sure that they don’t give up