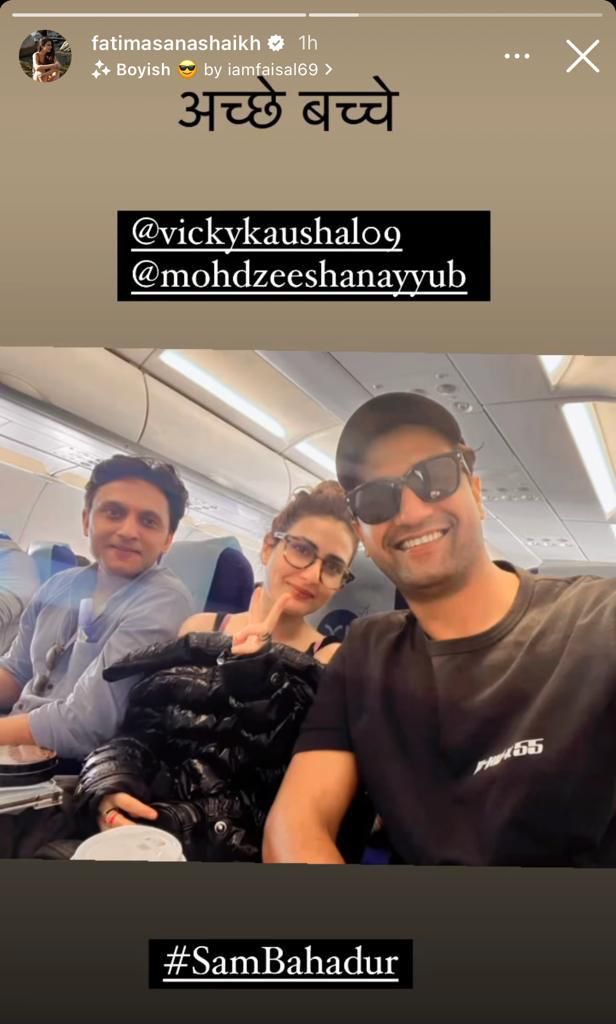 Fatima Sana Shaikh is one actress who has always stunned the audience with her amazing performances on the screen. While she left everyone impressed with her amazing performance as Lali in Modern Love Mumbai, she is now gearing up for playing a real-life character on the screen in her upcoming ‘Sam Bahadur’, and for the same, she jets off to her other schedule with her costars.

Seems like Fatima is in no mood to set her feet on rest as she directly jets off to work on her upcoming ‘Sam Bahadur’ with her costars. The actress recently posted a picture with her co-stars Vicky Kaushal and Mohammed Zeeshan Ayyub from a flight as she jokingly calls them ‘Ache Bache’ that she wrote on the picture.

A method actor in a true sense, Fatima will be seen playing the character of former late Prime Minister Indira Gandhi and as we have seen many of her acting spectacles, it would be an amazing treat to watch her holding such a strong role in the film.

On the work front, Along with Sam Bahadur Fatima Sana Shaikh has an interesting lineup and she will also be seen in Dhak Dhak Directed and co-written by Tarun Dudeja, co-produced by Taapsee Pannu, Pranjal Khandhdiya and Ayush Maheshwari.

Related Topics:Fatima Sana Shaikh
Up Next