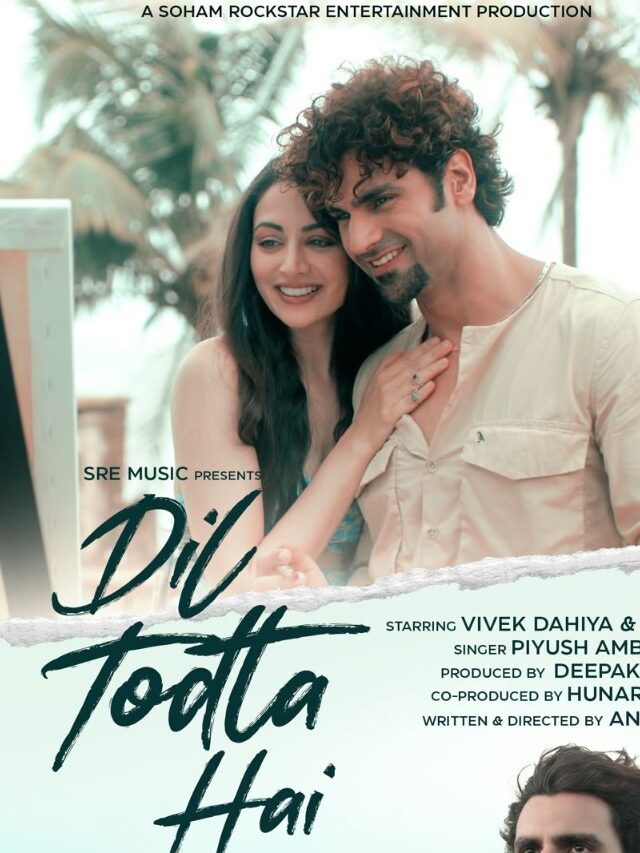 Mumbai: SRE Music, the music arm of Soham Rockstar Entertainment, is now all set to launch its first single “Dil Todta Hai”. The recently released teaser meet with tremendous response. This new single is a soulful song sung by the talented Piyush Ambhore and has handsome hunk Vivek Dahiya and ever so beautiful Zoya Afroz in the lead. The song is beautifully picturised and tells an intriguing love story between the two main lead artists.
The song producer & founder of SRE Music Mr. Deepak Mukut who has an ear for music, said “We start our musical journey with this non-film single & intend to come out with two to three songs every month. We aim to work with diverse talents and provide opportunity to newer singers, lyricists, composers etc. apart from the established ones. SRE Music will give new musical talent to the industry”.
Director Ankit Ojha added that “this song is an interesting take on how one can channelize energies in right direction when you are heart broken. In such situation one can achieve extra ordinary things, which may not be possible in normal circumstances. Dil Todta hai is a heart wrenching tale of lost love.”
The song Dil Todta Hai is produced by Deepak Mukut and co -produced by Hunar Mukut for SRE Music. Sung, written and composed by Piyush Ambhore, it features Vivek Dahiya, Zoya Afroz & is directed by Ankit Ojha.
Soham Rockstar Entertainment a motion content company founded by Deepak Mukut, which is primarily into films, OTT & other motion content, it launched its music label SRE Music with deadly field agent drama film “Dhaakad” staring Kangana Ranaut. Other musically hit films Shaadi main Zaroor Aana, Genius, Sanam Teri Kasam, Mulk, Forensic etc
About: Soham Rockstar Entertainment is a media corporate house, which primarily focuses on motion content (Feature Films, Short Films, TV Soaps, Web Series, OTT & Music) aggregation, trading & syndication; SRE also assist creative fraternity in Incubation, Project Management & Consulting, Project Financing, Public Relations, Promotion & Marketing, Social Media Integration, Production Oversight & Technical Support through in-house team of skilled professionals.

Related Topics:Deepak Mukut
Up Next

This Navratri make sure you don’t keep your partner waiting. And that what happens in this fun single of SRE MUSIC with stunning Kashika Kapoor & dashing Vardhan Puri.