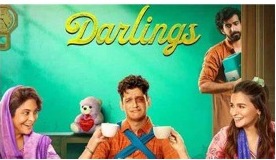 September 14 is celebrated as Hindi Diwas, a day dedicated to recognise the importance of Hindi. With a diverse selection of films, Netflix is home to some great Hindi stories. Here is a selection of some of the movies on the service.

Darlings is a dark comedy that takes a different spin on the subject of domestic violence. Starring Alia Bhat as Badru, Vijay Varma as Hamza and Shefali Shah as Badru’s mom, the film has made a significant impact by reaching the Top 10 in 26 different countries. The storyline revolves around Badru, a housewife, and her husband Hamza, and how her unwavering love for her husband compels her to ignore all the warning signs in their relationship. Additionally, Badru’s mom’s constant warnings go unheeded. The young woman continues to hold out hope for a better tomorrow despite coming from a humble upbringing until things go a little too far.

Dhamaka ranked in the Top 10 in 11 countries starring Kartik Aaryan, Mrunal Thakur. Arjun Pathak (Karthik Aaryan) is relegated to radio after being a prominent newscaster on prime time television. He sees an unsettling phone call from a bomber as a slim chance to recapture his former fame. In the event that the bomber’s demands are not granted, he threatens to blow up the Bandra-Worli Sea Link. When lives are on the line, should Arjun save his waning career or the hostages on the bridge?

A modestly accomplished magician evolves into a mediocre football player. The lady he loves, his most prized possession, is in jeopardy. Will he succeed to win the heart of his lady-love’s father and prove his worth is the question? Jaadugar starring Jitendra Kumar in lead role ranks in the Top 10 in 9 countries.

Haseen Dillruba, making its mark in 15 countries by gaining its rank in the Top 10 is a romantic thriller starring Taapsee Pannu, Vikrant Massey, and Harshvardhan Rane.  A young lady, Rani suspected of masterminding her husband, Rishi’s horrific murder. But as the investigation delves into her rocky married life and a torrid affair, what seemed like an open and shut case, turns into a complex whodunit.

In a distant Rajasthan village, an antiques trader named Siddharth searches for old, deserted forts. There have been other brutal murders that have recently devastated the area. Surekha Singh, a local police officer, encounters Siddharth while looking into these murders and quickly learns that the ruggedly attractive antique trader is not who he seems to be and that his motivations may be much more cunning. Thar, starring Anil Kapoor and Harshvardhan Kapoor ranks in the Top 10 in 13 countries.

Related Topics:Hindi Diwas
Up Next