As Virat Kohli lead India to a memorable win vs Pakistan, 101 Yagya’s were performed for Team India across the country by Cheering Squad India Foundation and My OmNamo
Advertisement 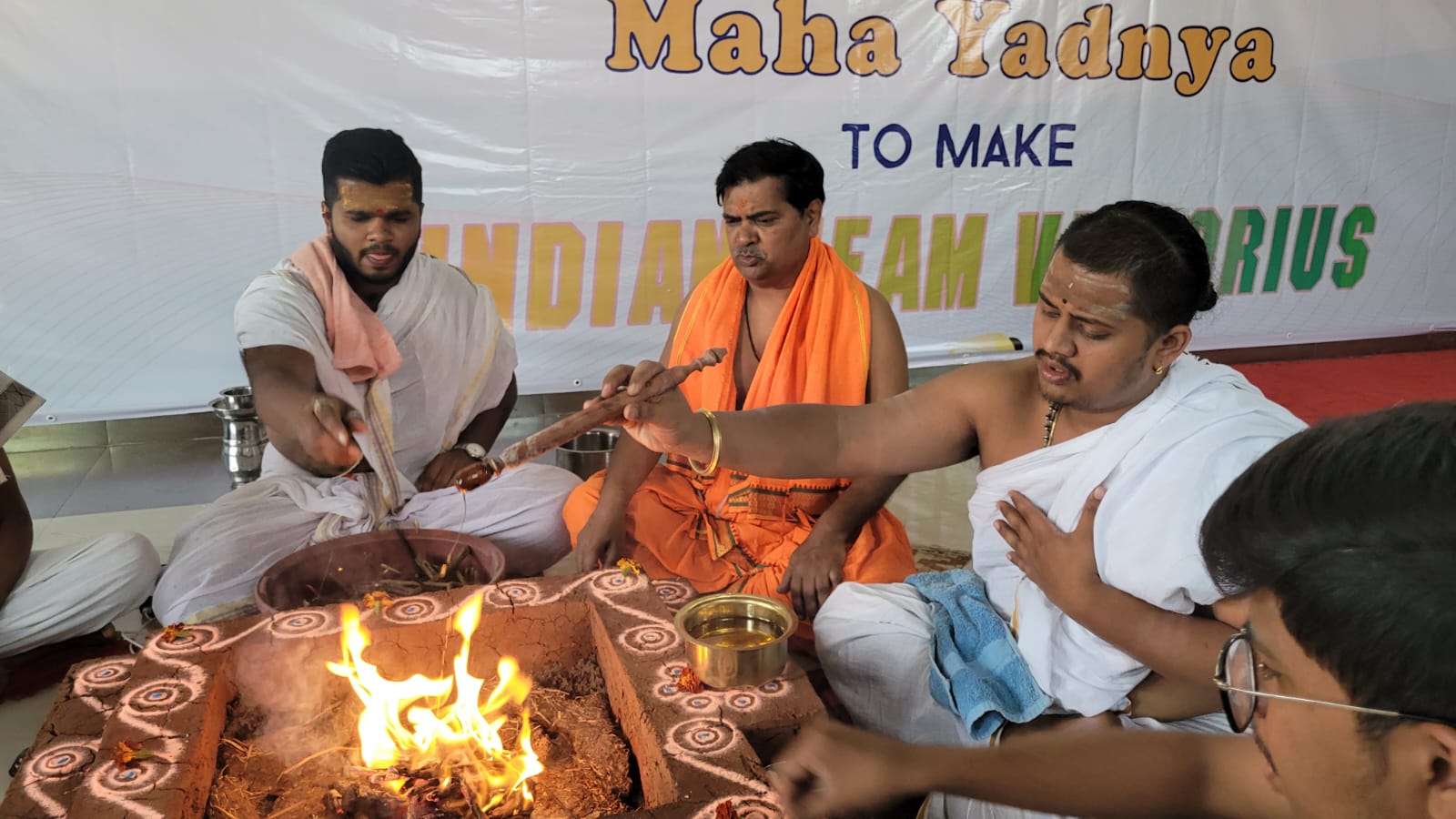 Mumbai, Delhi, 23rd October 2022: The much-anticipated T20 World Cup clash between India and Pakistan saw a stunning four-wicket win of India over arch-rivals Pakistan with a magnificent 53-ball 82 not out in their opening T20 World Cup game at the Melbourne Cricket Ground on Sunday. As the Men In Blue, gave their best shot the country hit a wave of hopes and umpteen prayers for the win. Joining this movement was also Mumbai based NGO Cheering Squad India Foundation (CSIF), along with spiritual start-up My Omnamo, who performed a Maha Yagya in Trimbakeshwar today, which is one of the twelve Jyotirlingas near Nashik to mark the beginning of the spiritually empowing initiative and spread the power of vedas.

‘Vijayji Bhava Maha Yagya’, is the biggest and first-ever spiritual campaign of this level, a cricket season as ever witnessed. The initiative hopes to bring in collective prayers for Team India. The first in the series was performed today while India played their best and Virat Kohli lead India ro a memorable win against arch rivals Pakistan.

The ‘Maha Yagya’ was streamed LIVE on www.cheerforindia.org and masses could offer their prayers through contributions on the site.

“Cricket is a religion in India and every Indian becomes passionate and emotional every time Team India plays. Men in Blue are absolutely adored by the crazy cricket fans and we see a wave of patriotic fervour in the country during this time with umpteen prayers through hawans, hopes and positive vibes all around. Around, 101 location across India like Chennai, Tirupati, Sriperambadur, Pune, Vellore, Sindhudurg, Hyderabad, Aurangabad and various spiritual cities & temples, community halls, and vedic pathshalas across the country also conducted the Maha Yagya and will continue to do so for the upcoming world cup match days also”, shared Makarand Patil, Founder, My Omnamo and Cheering Squad India Foundation, (CSIF).

This is an attempt to unite India under one voice of “#vijayibhavaindia” and to bring the ICC T20 World Cup trophy home one more time. The organizers have urged Indians to participate & contribute in the yagya from all the cities and cheer for the Indian Cricket Team.

Makarand Patil, Founder, My Omnamo and Cheering Squad India Foundation, (CSIF) further adds, “Since a lot of Indians perform hawan’s for a good luck, we envisioned that we could bring cricket and spirituality together and perform “Vijayi Bhava” Maha-Yagya” at 101 locations in the country. We hope to bring together oneness of One Billion Indians pledging and praying in unison for our Men In Blue. Through our website, cricket fans can donate and be part of biggest nationwide hawan campaign. Maximum contributions raised through this campaign will go to several NGOs. We are taking this emotion to every corner of the country this year as masses can Cheer from Nashik, Cheer from Mumbai, Cheer from Hyderabad and more”.

Over the years we have seen Indian Cricket fans across performing ‘havans’ to seek the blessings of God ahead of India’s matches in the T20 Cricket World Cup and key championships. “This gesture of fans performing ‘havan’ and seeking blessings from God for all Indian players so that they perform their best in the upcoming cricket matches is widely noticed every year”, Makarand Patil further adds.

ABOUT CHEERING SQUAD INDIA FOUNDATION:
CHEERING SQUAD INDIA FOUNDATION aims to cheer and promote Indians players, Indians teams and Indian’s participating in national, international events, competitions spiritually. The aim of the foundation is to be able to promote sports & culture in India. Cheering Squad India Foundation, as the name stands is a Section 8 Company which has been working meticulously for the development and betterment of Sports & Culture in India.

Advertisement
Related Topics:Virat Kohli
Up Next