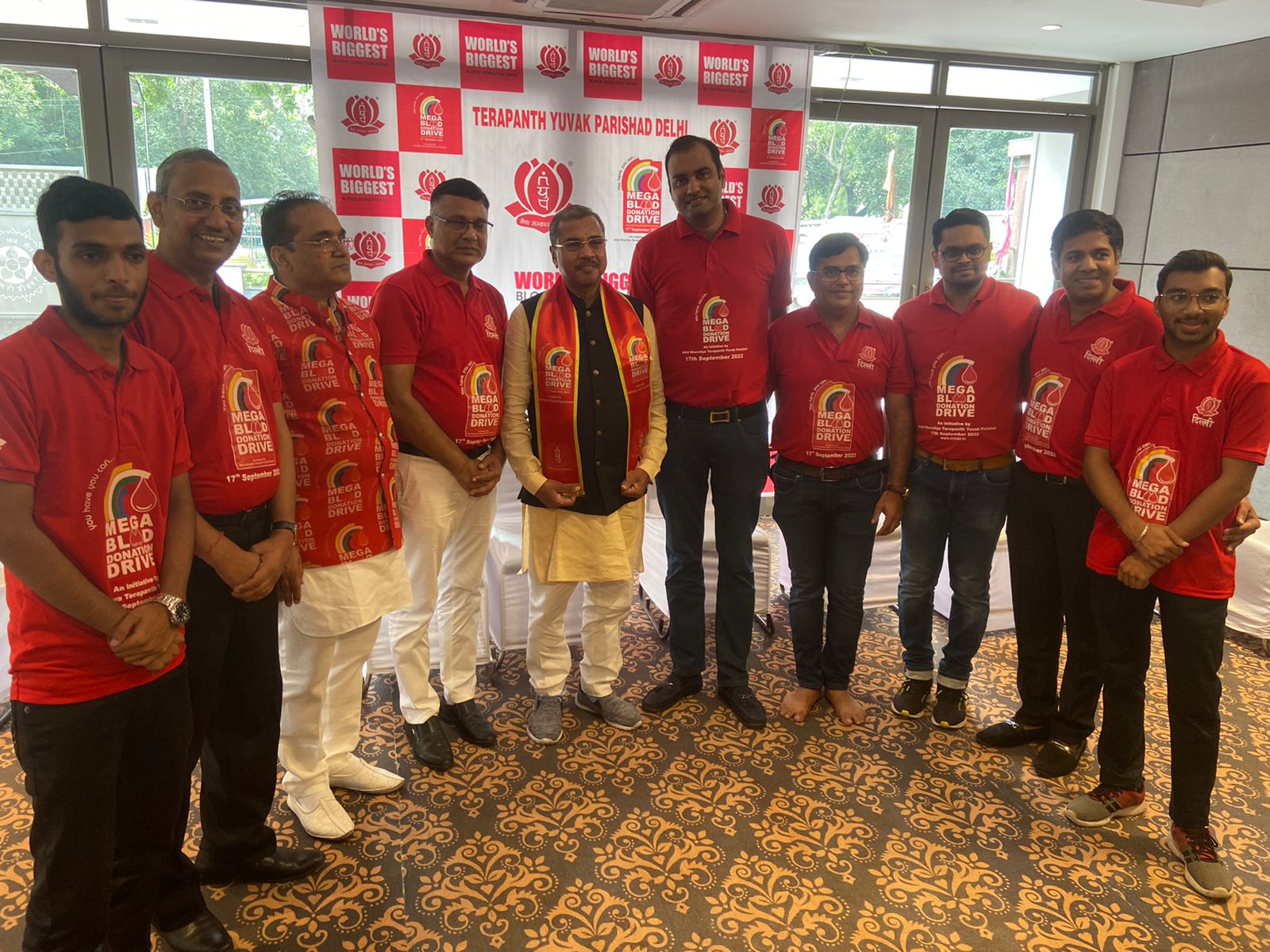 The world’s largest blood donor NGO Akhil Bhartiya Terapanth Yuvak Parishad (ABTYP), with 350 branches and a potential of more than 45000 energetic members launched a major Mega Blood Donation Drive on the 17th of September 2022. The drive positively intended to organise more than 2000 camps and donate over 100000 units of blood across the globe. It was an encouraging drive for the countrymen in India and for all the Indians beyond the borders.

Ahead of the countrywide blood donation drive, several Bollywood celebs had come forward to extend support to the drive on social media. They expressed their gratitude for being part of such a philanthropic activity and urged everyone to join the cause. Many celebs like Shilpa Shetty Kundra, Rajkummar Rao, Sonu Sood, Vidyut Jammwal, Boney Kapoor, director Aanand L. Rai, Tamannaah Bhatia, Bipasha Basu, Raveena Tandon, Karan Kundra and others tweeted and shared stories on social media in support of the campaign, and showed eagerness to support the event that took place on PM Shri Narendra Modi’s birthday.

Renowned celebrities from Bollywood, sports and business fraternities have always been known to be an instrumental force in supporting noble causes, philanthropic work and charitable activities.

Popular names from Bollywood including Rajinikanth, Chiranjeevi, Sanjay Dutt, R Madhavan, Vaani Kapoor, Raveena Tandon, Vivek Oberoi had supported the noble mission of ABTYP and had wholeheartedly joined the cause of creating awareness around the nationwide organisation of MBDD, urging people to come forward in huge numbers and support it and thereby creating impact in 20 states, 1000 cities with 2000 camps along with the combined efforts of more than 25000 volunteers, many NGOs and the government’s support.

Bollywood celebrities, including the young guns, had stepped up to assume responsibility and contribute in their own ways to support AKHIL BHARTIYA TERAPANTH YUVAK PARISHAD (ABTYP)’s Mega Blood Donation Drive (MBDD) – a simultaneous nationwide collection that took place on 17th September, 2022.

On the most special occasion for India, PM Shri Narendra Modi’s birthday, the campaign came to be one huge event of enthusiasm and charity. The MBDD was attended by several well-known names from the film industry like – (celebs). The event happened to be one major countrywide success as it also witnessed participation from some renowned faces from the political and as well as sports fraternity like health minister Mansukh Mandwiya, railway minister Ashwini vaishnav, J P Madda and many more. Even for the first time ever Eraktkosh app crashed due to heavy registration.

MBDD witnessed a massive 94,833 registered donors nationwide with 5,922 approved camps and blood donation from 20,692 donors in all. The units of blood donated during the campaign was (digits). The mega blood donation drive has been aiming to exceed its previous record of donors contributing to the humane cause. MBDD once again emerged victorious in restoring faith in humanity with such massive participation from all over India.

Hitesh Bhandia the Co-ordinator of ABTYP, says, “We hold immense gratitude towards the response that we have received so far for all our blood donation drives. We’ve had the opportunity to see some of the most beautiful sides of humanity. There’s nothing more altruistic than selflessly giving something of yourself to help someone in need. Never realised that giving will become a much bigger joy than receiving. Hope, faith and empowerment are what a blood donor provides.”

Not just in India, the MBDD took place simultaneously in 27 other countries including Asia and South Africa encouraging the most massive blood donation of all time!

Advertisement
Related Topics:PM Modi
Up Next